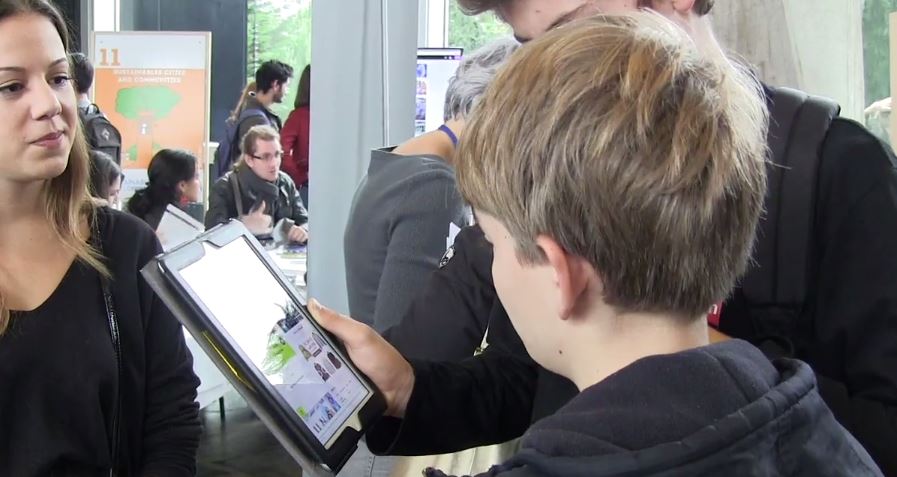 Organisers expected around 300 visitors, mainly students, but an hour after opening, the main hall of UNESCO’s headquarter building was overcrowded with close to 1000 youth who came to celebrate UN DAY and learn how best to support UN and its 17 sustainable development goals.

The success of the first UN DAY to be organised in Paris, a joint initiative by the UN Regional Information Centre’s French desk (UNRIC), UNESCO, the UN Communication group, the French UN Association (AFNU) and the Ministry of Foreign Affairs, showed just how curious younger audiences are to learn about the 2030 Agenda and how they can participate, support and engage with the UN to transform the world into a better place. UNESCO’s executive director, Irina Bokova, joined the crowds, visiting the various stands, praising the spirit of ‘ONE UN’ and the promotion of multilateralism.

Alongside the UN agencies (UNHCR, UNEP, UNESCO, WFP), representatives from civil society were invited to share their experiences as actors of change with the youth. Among them, ENACTUS, a non-profit organisation, works with a community of student, academic and business leaders committed to using the power of entrepreneurial action to transform lives and “shape a better more sustainable world”; or Make Sense, which engages with thousands of citizens and social entrepreneurs across the world to build local solutions for the Global Goals. They partner with both governments and companies to scale their best solutions.

Yacine Ait Kaci (YAK), creator of Elyx, the UN’s first digital Ambassador, signed copies of the newly illustrated version of the Universal Declaration of Human Rights (UDHR) which he designed. YAK has also just finished working on an SDG booklet that uses the SDG icons illustrated with Elyx and soon to be published by UN headquarters in New York.
The Goodplanet foundation, led by Yann Arthus Bertrand, presented its newly inaugurated “Domaine de Longchamps”, a wonderful place in the Bois de Boulogne, Paris, dedicated to ecology and humanism. The Goodplanet foundation has been an engaged actor in protecting the planet and its inhabitant for the last 10 years. The two founders of #Dysturb, a network of photojournalists driven by the desire to make visual information freely accessible to a wider audience by pasting large images in city streets presented their first print edition dedicated to climate change. The World Food Programme for its part invited a master Chef, Adel Dakkar, who talked about sustainable food and consumption. All this guests are source of inspiration for students who would like to get involved in achievements of the SDGs.

Researchers, academics, former UN staff and diplomats were also present to engage in discussions with students on the UN and the SDGs. “The engagement of youth in the promotion and implementation of the SDGs is key to their success. We also need their support to make sure that the general public know about the goals 193 countries have committed to achieve by 2030”, Fabienne Pompey, head of UNRIC French desk said.

Do you want to know more? Have a look at this video :