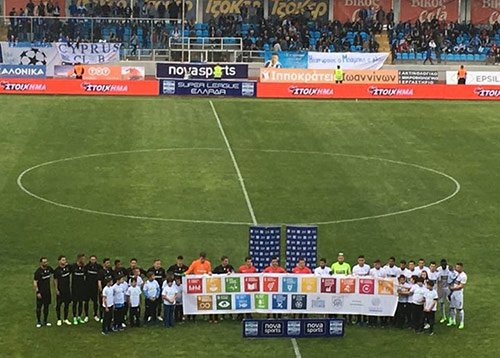 Despite it being the last game of the season, featuring two of Greece’s most popular football teams, Sunday’s game was no ordinary football match.

Rather, it was a game to celebrate our shared humanity, a festival of youth and sports for the promotion of our common goals:  the 17 Global Goals for Sustainable Development.

Before the official start of the Greek Super League game between PAS GIANNINA FC of Ioannina and AEK FC of Athens, the two teams and the referees took to the field holding a big banner featuring the 17 SDGs.

The players were accompanied onto the pitch by boys and girls sporting t-shirts emblazoned with the SDGs logo watched by thousands of fans.

Whilst the SDGs were unveiled on the pitch, the ground’s loudspeakers explained what they are about and how they could transform our world into a better place.

The whole event was broadcast by one of Greece’s major TV stations, thereby introducing the SDGs to millions of TV viewers. It received further coverage by major TV, print and online media in Greece.

Themis Tzimopoulos, PAS GIANNINA’s captain and a member of New Zealand’s national football teamMr. Themis Tzimopoulos, one of PAS GIANNINA’s captains and a member of New Zealand’s national football team, expressed his personal support, as well as that of his team mates, to the overall initiative and achieving the 17 Goals, especially Goal 1- the elimination of extreme poverty.  “I have seen extreme poverty with my own eyes during my travels with the national team”,  said Mr Tzimopoulos. “That’s why  I want  zero poverty in the world”.

This creative and fruitful collaboration between the United Nations and PAS GIANNINA would not have been possible without the support of the President of the club, Mr. Giorgos Christovasilis, and of the staff  (thank you Babis Karvelis),  all of the players, and most of all of the supporters.

UNRIC would like to express its gratitude to all of them.

The match ended in a draw 1-1. But regardless of the end result, when the referee signaled the end of the game, all attending had helped to score in promoting all 17 Goals for a better world.

The news was originally posted on UNRIC's website at the following link.