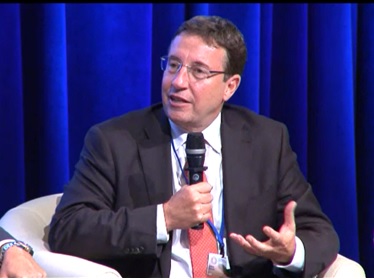 A high-level seminar on October 12, 2017 highlighted the perspectives of the World Bank partners—including local and regional governments, businesses, civil society organizations, and academia—working to achieve the SDGs at the local level.

The first part of the 90-minute session showcased Colombia’s efforts to integrate SDG targets into its national development plan, peace agreement, and international commitments. The second part focused on the perspectives of national and global leaders who are deeply involved in SDG implementation.

Click here to see a video of the event.

At this occasion, Achim Steiner, UNDP Administrator, shared UNDP's perspective on the localization of the SDGs

[As prepared for delivery]

It is a pleasure to join you today and a privilege to share UNDP’s perspective on the localization of the Sustainable Development Goals (SDGs).

Let me begin by emphasizing that we – global organizations like UNDP and the World Bank, and our partners across all levels – need to consolidate our strengths to make the spirit of Agenda 2030 come to life for all people.

Localizing the SDGs means more than just “landing” internationally-agreed goals at the local level. It means making the aspirations of the SDGs become real to communities, households and individuals, particularly to those who are at risk of falling behind.

Local governments are critical in turning Agenda 2030 from a global vision into a local reality. And local communities and stakeholders, who know individual and collective needs and capacities best, are critical partners in implementing and realizing our global accord.

Allow me to elaborate why I am convinced these drivers are key for localizing the SDGs.

Sensitization: It is widely acknowledged that good governance processes need to be inclusive and participatory. To engage meaningfully, people need to know about Agenda 2030, and local actors (including civil society, private sector, and elected local councils) need to be engaged and play their role in implementation. UNDP supports the process of SDG mainstreaming in countries across all regions, from least-developed to middle-income countries.

Accountability mechanisms: Accountable and participatory governance which underpins the SDGs is explicitly stated in Goal 16 on building peaceful, just and inclusive societies. It not only requires the presence of transparent and more inclusive institutions, it also requires a strong commitment to curb all forms of corruption, down to the local level.  UNDP has pioneered work on corruption risk assessments in such sectors as education, health, and water.

Participatory planning and service delivery:  Localization of global and national development objectives is not a new process. For decades UNDP has been supporting local governments in delivering services that are responsive to the needs of their populations. The importance of inclusive planning and monitoring processes particularly at the local level cannot be underlined enough. Today, building on the lessons from the MDGs, there is an agreement that progress towards the SDGs must draw on the actions of local governments and galvanize participation from all actors in society.

Local economic development (LED):  Our global goals will not be reached unless our communities at the local level see concrete dividends. Since its creation, UNDP has supported national and subnational governments in developing and implementing inclusive LED efforts. These increasingly integrate social and environmental standards within local economic agendas, help to effectively reduce disparities between territories, foster social cohesion from the bottom up, generate local business opportunities and jobs, and very importantly, bring women and excluded groups into productive employment.

Last but not least, the importance of partnerships and the commitment to collective action:  At UNDP, we value partnerships for their ability to guide our strategic priorities, spur concerted action to deliver on shared objectives, ensure that synergies give donors better return on investment and ensure that the sum of the international development system becomes greater than its parts. More than ever, we need to bring together national and local governments, the private sector, civil society and non-traditional players in the development arena such as foundations, social enterprises, traditional leaders, religious organizations and academia.

UNDP has a successful track record as a convener of the UN development system and working with governments to bring together the skills and ideas of different stakeholders. Where the SDGs come to life – at the local level – we have an equally important role to advocate for the central role of local governments and local development actors.

To put those principles into practice, UNDP and the UN system have established strategic partnerships with a variety of networks of local/regional governance actors.  For example, with UN Habitat and the Global Taskforce of Local and Regional Governments, we have created a learning platform with tools and guidance on localizing the SDGs (www.localizingthesdgs.org). With Agenda 2030 being universal, we are partnering with cities, and local and regional government associations in both North and South to support the SDG localization process.

We are also working closely with multiple UN agencies, including UN Habitat, UNV, UNCDF and UNICEF, as well as the Local 2030 Initiative which brings all the UN agencies together under the UN Secretary-General.

These multi-stakeholder partnerships inspire our efforts to do development differently when transforming global commitments into local action. In closing, let me re-emphasize the importance of consolidating our strengths to make the spirit of Agenda 2030 come to life for all people.