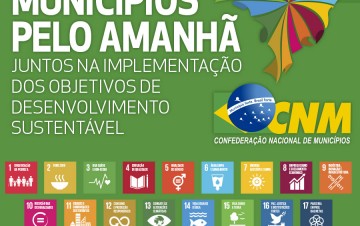 This agenda of international objectives addresses issues strongly linked to the competencies of Brazilian municipalities and provides an opportunity for municipal governments, state and national governments, civil society, private sector and academia to work together for local and regional development. This is possible because this agenda is being widely disseminated by organizations, governments, banks, students and citizens, who are working to contribute to the achievement of these goals.

As the Municipalities already work on this agenda in their daily lives, the CNM considers important that managers and the population understand how their actions are linked to the SDGs, and how they can enhance the implementation of activities.

Following the Goal 17, which talks about partnerships and means of implementation, the Confederation presents good actions shared by the Municipalities. This is the case of Barcarena (PA). With a population of more than 121 thousand inhabitants, the Municipality works to reach the goal of the development agenda. "The MDGs and SDGs help us in planning and the right way to spend money and favor the smaller and harder classes. This has brought us very good results in the government ", points out the mayor, Antônio Carlos Vilaça.

The CNM also includes the National Commission of SDGs, the presidency of the Republic, and is represented by the presidents of the Municipal Association of Pernambuco (Amupe), José Patriota, and the Association of Municipalities of Paraná (AMP), Marcel Micheletto. Patriota stresses the importance of the Confederation joining the Commission. "It defines the guidelines and coordinates the work that should be implemented throughout the country, so that Brazil improves its position, and so that indicators of people's living conditions can be changed," he says.

In Paraná, an effort was made and ensured that all municipalities of the State signed the cooperation agreement in the implementation of the Sustainable Development Goals (SDGs), which has already generated international recognition in an event in Geneva at the end of 2017.

CNM
The National Confederation of Municipalities represents more than five thousand Municipalities in the country. The entity works on excellence in municipal management and improvement of the quality of life of the Brazilian population.

In this campaign, the CNM makes available to managers and the population at large a lot of information about how their actions can be related to the SDGs, spaces to share initiatives, as well as images with the logos of the 17 SDGs so that each person can share in social networks how you are working for those goals. More information is available on the website www.cnm.org.br