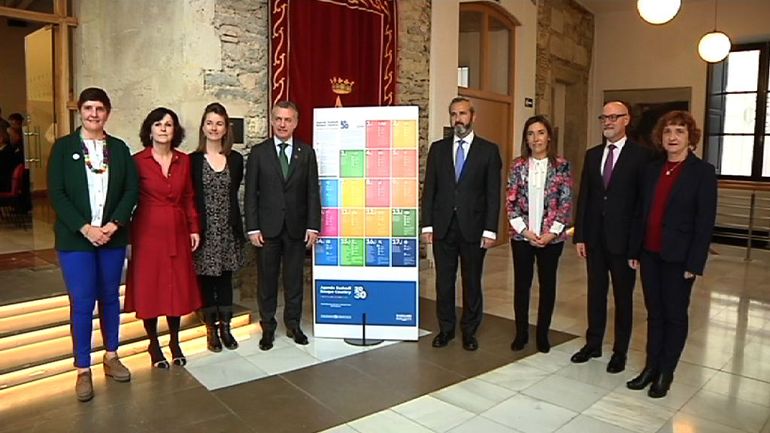 The article It was published originally in   this page   by the Basque Government .

The Lehendakari Iñigo Urkullu has presented this late the   Euskadi Basque Country 2030 Agenda; the contribution Basque to the Millennium Development Sustainable promoted by Nations United . UN approved 17 goals (ODS) to end poverty in all its forms, reduce inequality and fight change climate guaranteeing , at the sametime, no one is left behind. The document presented by the Lehendakari reflects the degree of alignment and contribution of the Government Program with this Universal Development Guide Sustainable. The Lehendakari has defended " the incorporation of governance multilevel and respect for responsibilities and willpolicy of the different levels of Government "   for the achievement of the SDGs.

Already   the Government Program   for the 11th Legislature approved in February of the year past, it marked the Sustainable Human Development as one of its focuses main .   It is , therefore, a document totally inspired in Agenda 2030 and in which commitments are acquired with society Basque for the next fouryears , under a settled Governance Model transparency, evaluation and accountability.

The document presented today by the Lehendakari, and approved Yesterday in Governing Council   constitutes the following He passed in the determination of the Basque Executive to focus its policies public in the light of the challenges of the 2030 Agenda.   This is the First Euskadi Basque Country 2030 Agenda, whose Temporal scope covers the period 2016-2020.   Link   17 Millennium Development Sustainable and 100 of the 2030 Agenda Goals to   93 of the Commitments   acquired by the Basque Government in Your Government Program ,   80 Planning Instruments,   19 Initiatives Legislative and 50 Indicators .The Lehendakari has stated that this effort "will allow align , in an effective way , the policies Basque public with this universal Agenda, and draw attention to the contribution of Euskadi to the implementation of Agenda 2030 "   and the achievement of the Millennium Development Sustainable.

The Euskadi Basque Country 2030 Agenda is , therefore, fully incardinated Government in action, which will facilitate his monitoring and evaluation . The General Secretariat of External Action will elaborate annually a follow - up report with the various contributions generated within the Commission Inter External Action andcontent be sent to the Basque Parliament .

DEVELOPMENT OF THE ACT

The document has been presented in an act celebrated this late in the Villa Suso Palace , in Vitoria- Gasteiz . The meeting has served to deepen in the 2030 Agenda promoted by Nations United and the content of the 17 Millennium Development Sustainable among those, ending poverty, ensure education inclusive and equitable , amanagement sustainable water and energy, growth economic sustainable or a management sustainable ecosystems and biodiversity, among others. It's about the   First Public Administration in the whole of the Spanish State in reflect his commitment to Agenda 2030 by submitting a proposal integrative , transversal,concrete , clear , temporary, participatory , adaptable and international .

The event was attended by a representative Nations Program United Nations Development Program (UNDP), Gemma Aguado, who has   influenced in the importance of the concept of governance and the involvement of those administrations plus close to the citizenship . This specialist supports the coordination ofUNDP efforts to territorialize / localize the SDGs. The meeting counted also with a colloquium between Idoia Fernández, Vice - Rector of Innovation , Social Commitment and Cultural Action of the UPV / EHU; Elsa Fuente, UNICEF Basque Country Coordinator ; Iñaki Garcinuño , President of CEBEK; and Pablo Gonzalez, President ofSareen Sarea. The four representatives have debated about the   need to adapt the objectives to the territorial reality universal marked by the UN,   task to which everyone, from any sector we have to contribute .

On September 25, 2015 the General Assembly of Nations United It approved unanimously the 2030 Agenda for Development Sustainable : an action plan in for people, planet, prosperity and universal peace with Millennium Development 17 Sustainable (ODS), to be developed in a term of 15 years , from 2015 to 2030.

From the definition phase of the Agenda, both Nations United as the Commission European, have given great importance to the role of sub- state governments to implement the same, as in Many cases are those who they have the competences , resources , and knowledge specific to the realities and needs plus close to society .Each territory must travel East path taking in consideration of your own circumstances . This is one of the characteristics differentials of the 2030 Agenda, its commitment to the promotion of the territorial dimension and with its adaptation at the regional level.

That is why the Basque Government has taken on the universal challenge posed by the 2030 Agenda, and adheres to the commitment world to contribute to the achievement of the Millennium Development 17 Sustainable.