The Seville Commitment: putting ´Local Action´in the center of the global development agenda 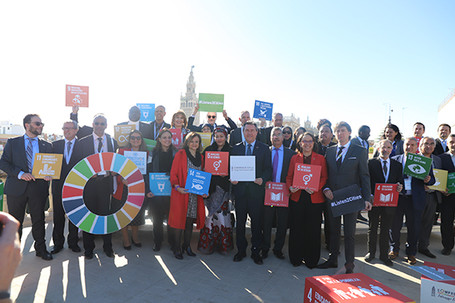 From the 25th to 27th of February a high level international meeting was held in Seville (Spain) to discuss the localization of the Sustainable Development Goals (SDGs). This meeting, planned by the governments of Spain, Ecuador and Cape Verde in collaboration with the United Nations  Local Initiative 2030 as well as with the participation of the Global Taskforce (GTF) of Local and Regional Governments was attended by the UN Assistant Secretary-General and proved to be an important milestone ahead of the high-level political forums to be held in New York in July and September.

During this two day gathering delegates from local and regional governments, brought together by the GTF, shared their visions and experiences with members of national governments, civil society and international institutions.

The event included a large delegation representing UCLG, led by Co-President Rodas, Mayor of Quito, and Vice President Martinez, Mayor of Soria. Joining the delegation were mayors from Rabat, Utrecht, Subang Jaya (Malaysia), and the Prefect of Pichincha, among others.

The delegation from UCLG emphasized the need to acknowledge the vital role that local governments play in the execution of the global agenda, especially laying the groundwork for the social transformations necessary to meet the ambitious goals set out by the 2030 Commitment. At the same time they underscored the importance of resources and skills needed to train local governments on how to meet their responsibilities and obligations to their citizens, stating that more than 65% of the goals of the SDGs depend directly on the services allotted by these levels of government. In addition, the delegation appealed to the participants to form new partnerships and underscored the work being done within the network of local governments around localization with the support of UN Habitat and UNDP in particular.

Mauricio Rodas, Mayor of Quito and Co-President of UCLG affirmed this idea, saying that, “The Global Taskforce is the mechanism that represents the voices of local governments at the global decision making tables, and it is important to do so to be able to transform the world from a local perspective while keeping the needs of the citizens.”

Carlos Martínez, Mayor of Soria and Vice President of UCLG Europe, spoke of the need for locally elected officials to “have a seat at the global decision making table because the 2030 Agenda will only be effective if we can make these improvements to daily life visible to those who we represent.”

During the “Mobilizing a broad alliance around shared goals, leaving no one behind” plenary Mohamed Sadiki, Mayor of Rabat, and Joan Ribó, Mayor of Valencia, shared their vision on how local governments are committed to the SDGs and how they are implementing said goals via public services in their cities to improve the quality of life of their citizens.

“Local governments work day in and day out to improve public services. In Rabat, for example, we work with local youth to improve access and quality of water in our city.” Mohamed Sadiki, Mayor of Rabat.

“The local leadership in Valencia strives to make improvements in healthy eating habits of our citizens through the SDGs, especially for our youth by focusing on local food policies.” Joan Ribó, Mayor of Valencia.

The voices of the youngest, our commitment, and our political will to reach the SDGs

The implementation of the 2030 Agenda is a multistakeholder process that requires a new focus on fluid dialogue and a unified effort across the various spheres of governance. This message was clearly present during the afternoon meetings where Frederic Vallier, Secretary General of CCRE-CEMR participated in the plenary on “Mobilizing youth for local SDG implementation”, where he said, “Younger officials have a key role to play in implementing the SDGs, especially in addressing and participating in critical debates regarding the future of our cities, and discussing how to empower the next generations”. Three mayors took the floor during the plenary on “Territorial approaches to localizing the SDGs” to vocalize to governments that effective implementation of SDGs has to first be done at a local level, and the importance in recognizing this fact.

Jan Van Zanen, Mayor of Utrecht and President of the Dutch Association of Municipalities (VNG), stated that, “Networks of local governments, such as UCLG, are the mechanisms needed to promote the coordination between local governments and international institutions”.

The day finished up with various panels where representatives from local governments were able to contribute to the discussions. Noraini Roslan, Mayor of Subang Jaya, highlighted that in from a local government, “we are working on achieving a more inclusive development process by empowering the local community via local committees which report on projects in relation to the SDGs, and the resources being allocated by mayors to implement them”.

On Wednesday the 27th of February, two days of high level dialogue regarding the 2030 Agenda on Sustainable development culminated in the “Seville Commitment”. This commitment, the product of said high-level discussions between representatives across all spheres of government, reaffirms that the localization of the SDGs has to do not only with political will, but the cooperation with local communities in the search for real local solutions for global challenges.

All participants reiterated their commitments to the 2030 Agenda, agreeing that an effective localization of the agenda must be based on local contexts, and implemented by citizens of local and regional governments so as not to leave anyone or any place behind.

The synergy produced by the diverse and fruitful debates was fully harnessed to reach a commitment to consolidate and focus the efforts in taking the next step in the Local-Global movement to localize the 2030 Agenda with local governments, civil society, and other local actors at the forefront.

They pledged to promote and allocate the financial tools necessary to support localization across all territories, on local and regional levels, via integrated approaches to sustainable development. Dialogues across all spheres of global governance will continue to be promoted.

Amina J. Mohammed, UN Deputy Secretary General, shared during the closing ceremony of this high level event in Seville that, “This commitment is an important step in not leaving anyone behind, and to promote the implementation of the agenda for all actors involved. It is essential that we work together across all spheres of government to include citizens and members in the localization of the SDGs”.

Minister of Territorial Policy, Meritxell Batet, echoed this sentiment saying, “The Seville Commitment demonstrates the will to implement the 2030 Agenda on a local level” and continued by thanking the representatives of local governments for improving the daily lives of their citizens through said implementation.

New joint initiatives were also identified during this two day meeting, as well as specific new commitments to improve and support these initiatives leading up to the upcoming high-level meetings to take place in July and September. Experiences and data were also compiled to prepare a report and assess the progress of the 2030 Agenda.

We hope this will be the beginning of a fruitful, long term commitment that consolidates and unifies the local and global movements taking place across territories of all size for the 2030 Agenda!