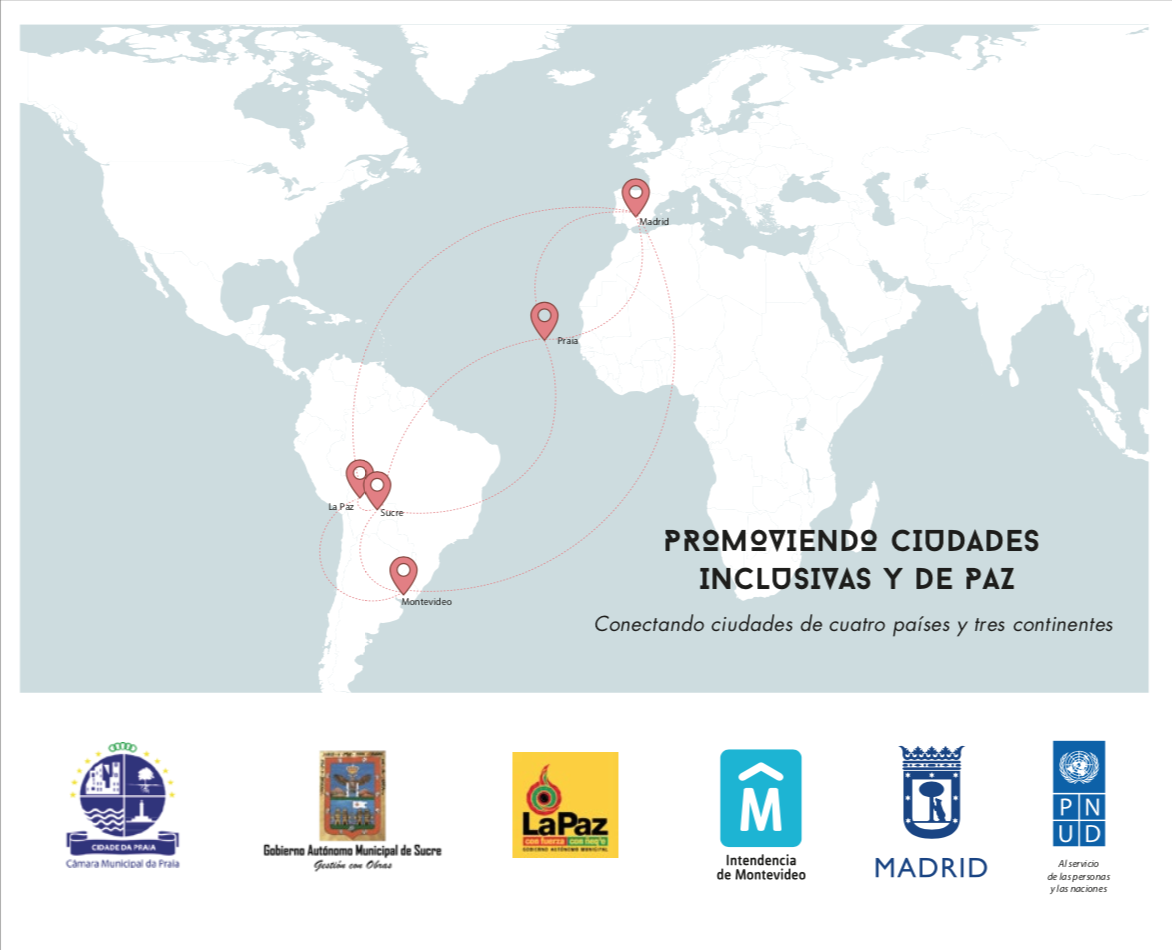 The city of Madrid and the United Nations Development Program (UNDP) have established an alliance to promote peaceful and inclusive cities within the framework of the location of the Sustainable Development Goals (SDG). With this objective, five cities from three different continents, Madrid, Praia, Montevideo, La Paz and Sucre, have worked together to activate processes in favor of the location of the SDGs and the promotion of participatory and inclusive initiatives of local governance.

In order to share their experiences and the achievements obtained under this alliance, representatives of the cities and the UNDP met on March 25 in Madrid in a meeting of cities in which the results achieved were presented around four areas of work: strategic location of the 2030 Agenda, awareness and socialization actions, urban violence and peace initiatives, and citizen participation.

The involvement of the UNDP country offices (Bolivia, Uruguay and Cape Verde) should be highlighted, which, in addition to promoting the actions contained in the agreement, have promoted alignment with other initiatives and actions in the intervention cities. At the same time, we must also highlight the involvement of different Departments of the City of Madrid, through the Directorate of International Action and Global Citizenship, in the actions of this agreement (citizen participation, territorial coordination, Media Prado-Lab, Culture, etc.)

The following is a summary of the processes and results under the Madrid - UNDP agreement.

Commitment to the location of the SDGs: alignment of the strategies of the cities within the framework of the transformations suggested by the SDGs.

The partner cities are committed to the challenges posed by the 2030 Agenda and have decided to take a step forward, aligning their sustainable city development strategy with the transformations suggested by the SDGs. For this, the cities have created in their institutions driving groups or motors of the Agenda and have activated processes that will culminate in the development of strategies and agendas of location. For example, in Praia, the Municipal Chamber has begun the process of setting up a participatory strategic planning platform that will culminate in the development of the Municipal Strategic Plan for Sustainable Development that will allow locating the SDGs at the level of the Municipal strategic planning. In Sucre and La Paz, the strengthening of the diagnosis of territorialized information of the SDGs has been supported, which will allow the preparation of an ODS agenda for the municipalities (Video - Survey SDGs Sucre) and (Video - Localizing SDGs in La Paz and Sucre). In Montevideo, the invitation made by the  2030 Agenda to innovation in local management (Video - Montevideo: a laboratory of urban innovation) has been used.

Appropriation of the location of the SDGs by the territorial actors through awareness and socialization actions.

Among the main challenges posed in the implementation of the SDGs has been the appropriation of the 2030 Agenda. Therefore, the partner cities have worked on raising awareness and socialization not only within the institutions, but also with the social and economic stakeholders in the territory.

For example, in Montevideo, the promotion of ODS has been promoted in Festivals for the coexistence implemented by the Intendance such as Montevideo Rock (Video - Montevideo Rock and the promotion of SDGs), in Praia a large number of actions have been organized of awareness in the neighborhoods, which has had a great media  impact and that these days is being presented to different actors in the city of Madrid (Video - Cape Verde and the localization of SDGs) and (Video - WorkShop on SDGs in Tira Chapéu, Cape Verde)

Recognition of the location of the SDGs as a tool to build peace partnerships.

At the same time, the commitment of Madrid and the cities with peace has been concretized, through the celebration of the Second Global Forum on Urban Violence and Education for  Coexistence and Peace, a global meeting aimed at strengthening and involving the cities of the world through the construction of urban spaces of coexistence and peace, and share good experiences to promote peaceful and inclusive societies for sustainable development from the local.

In turn, taking the experience of Madrid, and accompanied by the DEMOSPAZ-UAM research team, the cities of Praia, Sucre and Montevideo have worked on a first approach to a participatory diagnosis of urban violence and peace patrimony.

Access to digital citizen participation in the process of locating the SDGs in cities.

One of the key messages of the 2030 Agenda is the role of local governments in the design and implementation of public policies that contribute to the achievement of the SDGs. At the same time, it recognizes that this design must also be accompanied by the participation of the social and economic actors present in the city. That is why, under this alliance, and capitalizing on the tool of the Madrid City Council of digital citizen participation CONSUL, a module has been designed so that citizens can participate in how to design and implement the ODS in their territory through the elaboration of proposals, participate in debates and comment on municipal actions.

In turn, the cities had the opportunity to share this experience with other Spanish cities and social actors in Madrid in the seminar "Decentralized Cooperation and Local Agenda 2030", which the UNDP and the Union of Ibero-American Capital Cities (UCCI), in collaboration with the City Council of Madrid and the Spanish Federation of Municipalities and Provinces (FEMP), they organized on March 26 and 27 in Madrid.

The seminar was based on the dialogue between cities and on the role of local decentralized cooperation in locating the SDGs. With the presence of national, local and international institutions, the dialogue was structured in specific thematic plenaries and workshops, where the value added by the alliances of cities in the implementation of the 2030 Agenda was revalued. Among the main conclusions, it was noted that the 2030 agenda is an agenda of opportunities and in which work shared through partnerships will lead to a reinforcement of cooperation among equals. The public policy coherence approach will guarantee and revalue the endogenous potential of the territories in the face of the common challenges and opportunities offered by the implementation of the 2030 Agenda. More dialogue between the national and subnational levels, changes in the normative models and in the Financing models are basic elements in this process.