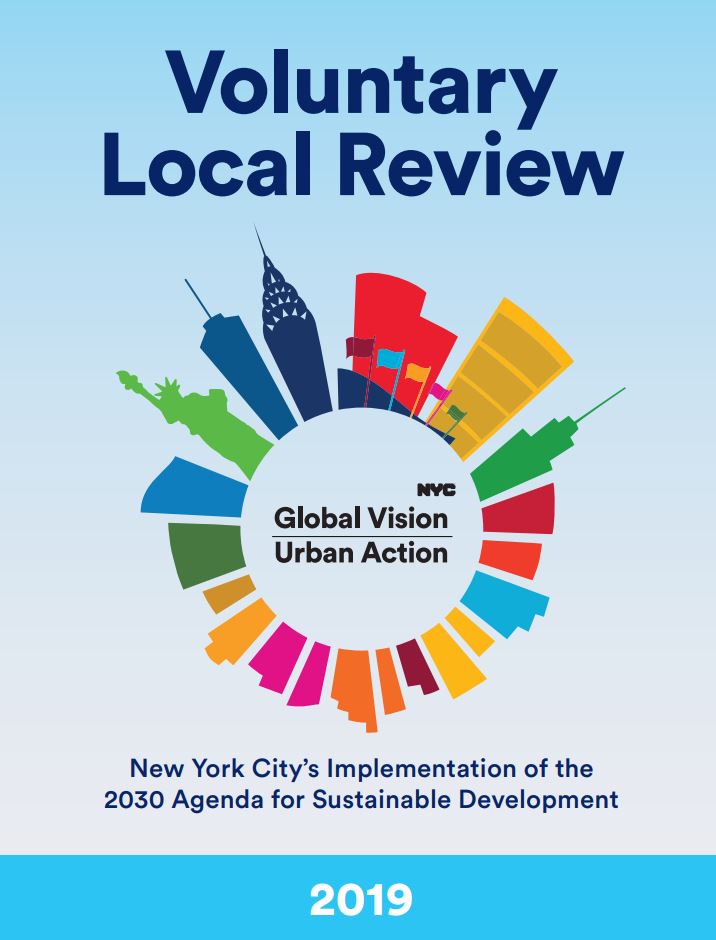 Commissioner of the Mayor’s Office for International Affairs Penny Abeywardena has just announced that New York City submitted its second annual report to the United Nations (UN) on local progress toward the global Sustainable Development Goals (SDGs). The Voluntary Local Review created by New York City in 2018 provides a tool for local governments to share sustainability achievements and challenges as the need grows for city leadership on urgent global issues.

Modeled on the Voluntary National Reviews submitted by UN member states during the annual High-Level Political Forum (HLPF) on sustainable development in July, the VLR allows local governments of all sizes to showcase achievements and challenges in advancing sustainability, equity and prosperity. As urgent global issues increasingly unfold on the local level, and with some national governments withdrawing from global commitments to fight climate change and inequality, the VLR gives local governments a concrete tool to become directly involved with the work of the United Nations for the first time.

“Now more than ever, it is imperative for local governments to play a role in the achievement of the Sustainable Development Goals, and with our submission of the Voluntary Local Review to the United Nations for the second year in a row, New York City continues to show the way,” said Commissioner for International Affairs Penny Abeywardena. “As cities today represent the majority of the world’s population, the Voluntary Local Review provides an accessible tool for local governments to elevate their voices on the international stage, and to commit to hold ourselves accountable to reaching the goals by the 2030 deadline. New York City calls on cities to join us.”

In 2015, the de Blasio administration launched OneNYC, a groundbreaking strategic blueprint for sustainable and inclusive growth. Later that same year, world leaders at UN headquarters in New York City committed to the 17 SDGs to end extreme poverty, fight inequality and injustice, and combat climate change by 2030. Also known as the Global Goals, the SDGs provide voluntary targets and a common framework for addressing global challenges.

The 2019 Voluntary Local Review uses data from OneNYC 2050, the City’s comprehensive strategic plan released in April 2019, to show how actions taken by NYC agencies address each of the priority SDGs at this year’s HLPF. Each goal is mapped to corresponding OneNYC 2050 indicators, with practical examples.

New York City committed in OneNYC 2050 to produce and submit a VLR to the United Nations every year. This year’s HLPF is focused on the SDGs of quality education (Goal 4), decent work and economic growth (Goal 8), reduced inequalities (Goal 10), climate action (Goal 13), peace, justice, and strong institutions (Goal 16), and promoting strategic partnerships for the SDGs (Goal 17).

"When national governments fail to lead, cities must step up to confront our climate crisis and address inequality in our society. With OneNYC 2050, New York City is demonstrating to the world what a Green New Deal looks like in practice and working to solve our shared challenges," said Daniel Zarrilli, New York City's Chief Climate Policy Advisor and OneNYC Director. "By linking our local actions to the Sustainable Development Goals and sharing that progress with the world, we are empowering other cities to help us create a livable future for the next generation."

“These goals provide an important framework for how we measure our progress in the fight for environmental and economic sustainability,” said Jeff Thamkittikasem, Director of the Mayor’s Office of Operations. “I’m proud of the team at Operations and this administration for showing the global community how we are doing our part to address these urgent challenges.”

New York City shares its pioneering VLR model with cities around the world, and provides guidance to local governments interested in tracking their progress using the framework of the SDGs. To date, Helsinki, Finland, and Bristol, United Kingdom have released VLRs while other cities are slated to release VLRs this year.

“The New York City Commission on Human Rights continues to strengthen and expand human rights for every New Yorker,” said Carmelyn P. Malalis, Chair and Commissioner of the NYC Commission on Human Rights. “In the past year, while the federal government has attempted to roll back human rights protections, the Commission has taken the lead on anti-discrimination enforcement, setting the bar for other jurisdictions around the nation.  This includes the enforcement of new protected categories, promulgating rules on gender identity and expression, issuing the nation’s first legal enforcement guidance on natural hair protections, and expanded community education and outreach programs. We are committed to upholding the UN’s Sustainable Development Goals for a fairer, more equitable and sustainable city.

“Stable economic and job growth is essential to creating prosperous communities. I’m proud to work and live in a city that protects and cares for its workers in a way that fosters that growth,” said Lorelei Salas, Commissioner of the Department of Consumer and Worker Protection. “As pioneers in municipal workplace rights from protections prohibiting on-call scheduling to helping freelancers get paid—and hopefully soon paid personal time—we are actively creating a new generation of labor standards that ensures decent work and sustainable economic growth. As a result, jobs are at a record high across all five boroughs and workers are benefitting from rights that meet the realities of today’s workforce.”

“Sustainable development is important to a future that holds promise for all,” said Cecile Noel, Commissioner of the Mayor’s Office to End Domestic and Gender-based Violence. “The efforts of the de Blasio administration to enhance New York City’s sustainable development goals continues to be enormously needed. It is an honor to work closely with the Mayor’s Office of International Affairs on this tremendous initiative.”

“Through the Voluntary Local Review, we’ve engaged with more than 20 agencies in NYC as well as cities around the world. This process allows us to both show what works well, and to learn from others in areas where New York City has identified a need for improvement. We look forward to continuing this work by strengthening these exchanges to ensure we achieve all 17 Sustainable Development Goals by 2030,” said Alexandra Hiniker, Director of the Global Vision | Urban Action Program for the Mayor’s Office for International Affairs.

To learn more about the Voluntary Local Review and to download this year’s report, visit nyc.gov/international.

The story was originally posted by the Mayor's Office for International Affairs.

The New York City Mayor's Office for International Affairs works to foster positive relations and encourage collaboration between the international community and New York City's agencies and local neighborhoods. The Office is focused on sharing New York City's policies and best practices globally, as well as responding to requests from foreign governments, the United Nations, and the U.S. Department of State. For more information, follow us on Facebook, Twitter, Instagram, and on our website.