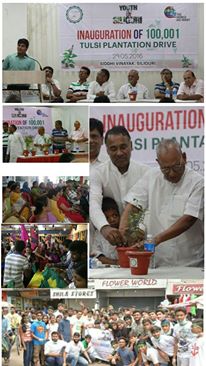 Last year, Youth Of Siliguri initiated The Pocket Money Campaign, which involved sensitizing youngsters to contribute a small portion of their pocket money to aid the victims of the massive earthquake in Nepal, which affected more than 25,000 people. The campaign raised funds of Rs.1,50,000 in ten days, and was used to provide support to students of five schools.

This year, Youth of Siliguri took to working on sustainable development, which has become a matter of crucial importance.

The United Nations’ Sustainable Development Goal 13 specifically talks about the need to take urgent action to combat climate change and nullify its impacts through awareness-raising and human and institutional capacity on climate change mitigation, adaptation, impact reduction and early warning.

Realizing the heat of the moment, Youth Of Siliguri, through community involvement by the efforts of youth, wanted active participation in the plantation drive. We learnt from the work of existing organisations and societies, and found out that tree plantation isn’t a challenge. The greater efforts lies in maintaining what is planted.

Thus, we wanted to share a message of “Share One, Plant One” i.e. we will distribute a plant free of cost and request the recipient to plant an additional tree or plant in return for our favour. According to a survey of a small sample size conducted by our team in different parts of the city, we found out that eight per cent of people will plant an additional tree apart from the given plant. So, through our efforts we hope to create a behavioral change in people. Check us out this video:

More than 600 volunteers joined us in campaigning. We hosted the city’s largest youth rally of 1,295 youngsters on the need to preserve the environment by creating a strong visual impact. During our peace rally, we utilized innovative handouts, placards and flyers to spread the message on the need for conserving water.

Nevertheless, the city saw the collaboration and dedication of the youth capacity distributing 100,001 Tulsi (Sacred Basil) plants to the general population within merely seven days. Apart from possessing multiple medicinal benefits, Tulsi is believed to release oxygen 24 hours a day. Though the life span of the plant is brief, the message was to make individuals personally responsible for the plantation, rather than a few organisations taking the initiative. Hence, we started distribution on May 30th and ended the distribution drive on the World Environment Day (June 5). A similar campaign would soon be launched in Bengaluru, alongside the Warmth Trust.

Regards and gratitude are also extended towards all my brothers and sisters who have taken a keen interest in being a part of the campaign. The enthusiasm and passion of the youth undoubtedly created a positive synergy in the city and provided them a platform which will ultimately lead to the creation of more youth-led initiatives in society.